I was leaving the light rail platform and noticed for the third time today a new MetroTransit ad affixed to the entrance of the platform. Check it out: 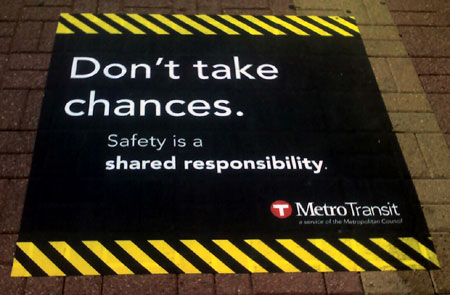 Apparently it's not marketed at me, because it makes no sense. As much as I can figure, it seems they're saying that they don't have bridges that collapse. Or something. If it makes sense to you, maybe you can enlighten me.

What they are really saying?

Don't blame us, blame yourselves.

There are similar problems in public schools. The myth of public ownership provides a fertile ground for bureaucrats who don't want the responsibility of ownership.

did you take that from you phone?

I don't think it has anything to do with the bridge. I think it's aimed at people who go to bars/clubs, telling them "Don't have a designated driver. Take MetroTransit, so that you can 'share' the responsaibility." That's what I would get from this ad, which I agree is ambiguous and not a good ad.