Today's feature is a shirt that is seldom worn. It doesn't sport a cool band name or even some geeky phrase, but it does show the skyline of one of my favorite cities: Chicago. 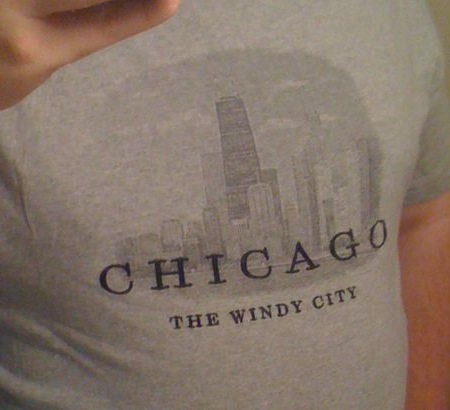 In April 2003 the University of St. Thomas Liturgical Choir went to Chicago for an extended weekend and it was lots of fun. Actually, we had so much fun, this touristy shirt was an afterthought purchased while loading up the bus to leave. It was purchased from the hotel gift/convenience store of the Holiday Inn we stayed at.

Despite the last-minute purchase, I do enjoy the shirt. It's got a nice look at the Chicago skyline and looks great. I think the reason I don't wear it too often is because it's a bit small and the lettering is embroidered into the shirt and therefore the way the shirt bunches up around it feels odd while wearing it.

Although, speaking of Chicago, I'm planning on going to Chicago at least once this September. Over Labor Day weekend, my parents and I are going to hang out in the parks downtown and meet up with my sisters who live a couple hours away. Also, I'm seriously considering a September 16th trip to Chicago to catch one of the final U.S. tour dates of my all-time favorite band, delirious?.

During these trips, I hope to catch up with some of the things that I've yet to experience in Chicago or want to experience again. First, The R!OT and others have said that I have to get some authentic Chicago pizza, and most say Giordano's is the place, so hopefully we'll be able to do that. Last year, while in town for the Music Builds tour, we also found some fun Chicago places that we liked. My favorite was Epic Burger, a classy new burger joint that also had really good fries for a pretty good price. My sisters fell in love with Argo Tea, a very nice downtown tea shop as well, and although I don't really drink tea, it just smelled nice in there. Of course, my family loves walking down by the water and hanging out in the myriad of park spaces along the water, especially Millennium Park and more.

ah, but Chicago was a cool band back in the day. Why, I even have two of their albums, so they have to be cool.