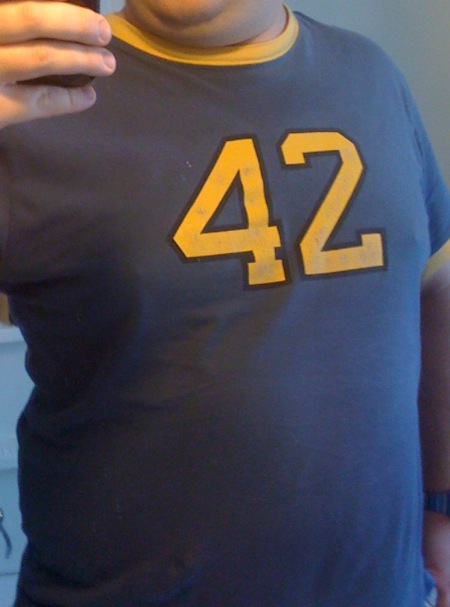 As you can see, it almost looks like a sports shirt. All the geeks wear it because it's the Answer to Life, the Universe and Everything, of course! Yes, that's right, it's the ultimate answer to everything in Douglas Adams's classic Hitchhiker's Guide to the Galaxy series.

Of course, this shirt was from ThinkGeek.com, the place to get all things geek. It's been featured on "The IT Crowd" and Transformers as well. I think I actually got this shirt as a present from work. One time, we all did a good job on a project or something and the boss bought us all whatever shirt we wanted from ThinkGeek.

One of the reasons I was excited about this shirt today was because tonight we're going to watch The Hitchhiker's Guide to the Galaxy, the 2005 film that was co-written by Adams and was released by Touchstone Pictures. I enjoy the film a lot and am looking forward to sharing it with friends.