The return of the T-shirt posts! This is a shirt I've had for a year or two and, like some of the other geeky, math-related shirts I have, they get lots of response. Sadly, most comment that the shirt is wrong because they do not understand the match concept, but a small minority of knowledgeable folks know the details and quietly and calmly say they like the shirt. Here's a bad photo of it: 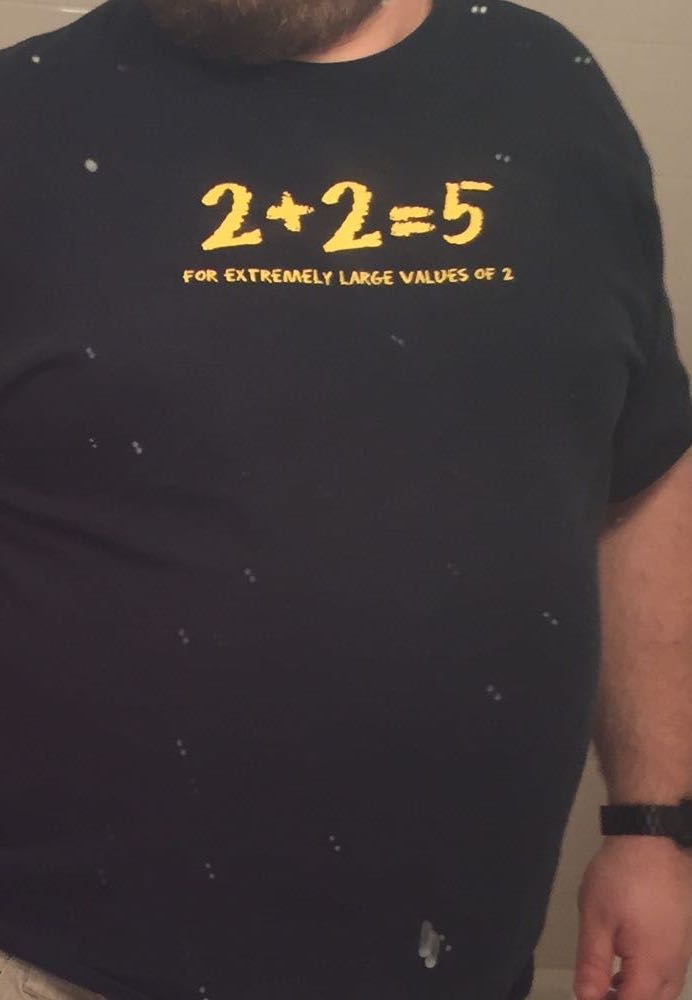 The shirt says "2 + 2 = 5" in big yellow chalkboard-style lettering with smaller text of "For extremely large values of 2" beneath in smaller letters on the front The black shirt has nothing on the back. The shirt was given to me as a Christmas gift from my sister and brother-in-law, if I remember correctly. (Good math fans to pick that one out.) The shirt was then available from ThinkGeek.

What this means to me is that math is somewhat relative. Usually, "2" is assumed to be an integer, but in math, "2" could be representative for any number, such as "2.3" or "6.0". And, more importantly, as a programmer, after a bit of programming with numbers you learn that math is hard. In many languages, how the data is stored and represented during processing can make the math not work as expected. For example, if you add integer "2" to decimal "2.6", the language may just automatically convert the decimal to an integer by lopping off the decimal part, so the answer may be the integer 4. To get an accurate result, you may have to force the integer to become a decimal "2.0" and then you'll get a decimal result, "4.6", from an add operation. So, to me, it shows that math is not as simple or straightforward as you think it may be.

Incidentally, all employees behind the counter at the Highland St. Paul Chipotle this afternoon were adamant that this shirt was completely wrong and one was even disturbed that someone would not agree it is wrong. I, as usual, just smiled and said it's a confusing math joke.