On Tuesday, Google announced another new product, Google Gears (of course, only in early Beta version). Gears is Google's new framework for developing applications that will work offline. They're making it an entirely open-source thing, as well as giving a detailed API sometime in the near future, so expect this thing to go far.

I have not tried it yet, but the architecture sounds interesting. Apparently the Google Gears system installs a lightweight web server, an SQLite database system, and a system for synchronizing between the local and Internet servers. It sounds similar to Adobe's Apollo that I talked about a couple months ago, but possibly even more open-source and extensible.

The first Google application that supports this is one of my favorites, Google Reader. Especially if I had a laptop, I'd love to read some of my feeds while on my train ride home (although I might just do that on an iPhone instead). I hope to see this take off with Gmail and other services so that I can write an e-mail offline, hit Send, and it will just go the next time I connect to the net. That'd be a big step toward the Google operating system (not the Facebook operating system - which brand of evil OS would you like better?).

Many have been talking about the future of computing being something you can easily touch. Tom Cruise did it in Minority Report. There's been demos of people playing Warcraft or manipulating maps and stuff only using very intuitive commands via their fingers. Heck, even Apple has gotten on to it by allow you to do some of these features on your iPhone with that "pinching" thing. 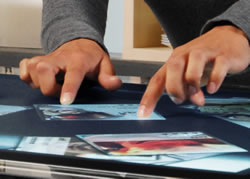 From the video demos on their website, it looks like Microsoft has done a good job of implementing this stuff. They call it Microsoft Surface, and they say it will be available for purchase in late 2007. The Surface is a 30-inch LCD display embedded in a table-like device. It looks like there's no Start buttons and such, just a table to interact with. The videos show people moving items around with just the flick of a finger and resizing them by pulling or pushing two corners at a time. It shows people putting their camera or cell phone on the table and all their photos laying out below the camera. Someone else can drag those photos onto their camera to copy them. The experience looks very intuitive and, well, it could be "the wave of the future." 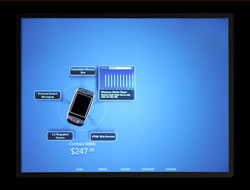 It looks pretty cool, but allow me to be a bit skeptical for right now. Sometimes Microsoft announces products at this stage and they don't really go anywhere. I get the impression that if you're going to see them anywhere this winter, it's going to be at the W or other such trendy, expensive places. But, hey, it's about time we got some better ideas than just using a mouse and keyboard to control our computers!

You can watch Bill Gates show off the Surface on the Today Show to see more cool functionality.

The Beginning of an Era

I'm looking forward to this. Back when I was a kid, I biked all around the quaint little town of Hastings. Finally, now, I'll hopefully start to do that on a limited basis. Today I purchased a nice, new bike for use here in Minneapolis. I didn't waste any time, for I biked about 17 miles to a picnic and then to the light rail station that I'll ride to regularly. By biking a mile or two to the nearest light rail station, I might even be able to cut down on commute time because I don't have to ride along the bus lines. I'm really looking forward to getting to bike around the city a lot more. Although, I'm a bit sad that Hannah is leaving and that I will no longer be able to get rides from her. Thanks, Hannah, for all the great morning drive times. (Now I'll have to find some way to stay informed about politics and news because I won't have NPR in the morning.)

Via WordPress' Matt Mullenweg I found this interesting post about building online communities. There were some interesting points. None of them really surprised me, but they are good points to keep in mind when endeavoring to build an online community. Also, if you're looking for more of the basics of building an online community, I recommend the earlier post he mentions as well. I'm going to keep these in mind as I'm building up inReview.net, for sure.

Yesterday a press release issued from Amazon.com announced that they will be opening an online music download store. There are many players in this still-emerging market, but having another big player is definitely a good thing.

Not much was really stated in the press release except the music will be DRM-free MP3 files. Also, it was duly mentioned that EMI, often listed as the third or fourth-largest music company in the world, will be partnering with Amazon.com from the outset to put their music in the store. No word on pricing or dates of availability have been given at this time.

What does this mean for the music industry? Well, it will only accelerate the idea of selling DRM-free music, which any consumer is for. Plus, it could give a major competitor with Apple's iTunes if Amazon's Jeff Bezos can cut a good deal with the labels. And finally, it shows that EMI did not make an exclusive deal with Apple for non-DRM'd music, which is a good thing.

Amazon.com has the funds and the longevity to take on this challenge, but they definitely do not yet have the style points that Apple has. However, in a commodity market like this, we'll have to wait to see how they can compete on the bottom line: features and price.

Music and Video from Indiana, Tennessee, and Texas

Here's a bunch of my recent favorite videos. First up, here's my sister and her roommates in a little production about South Bend, IN.

Second, Andy Osenga posted one of the best music videos I've seen in a while. It's not as professional as the Mute Math one, but it's a keeper:

Lastly, there's the dual-video selection that Shaun Groves called "Crowder Versus Squirrels". First, there's David Crowder telling it, which is hilarious, and then there's the anime version of the story in their first-ever music video.

My life has always been close to the east side of Bloomington, MN. For the last 15 years or so, the People of Praise has had their headquarters there. I went to middle and high school at Trinity Schools in the same building. And now, I work just a mile away from there. Of course, though, the big presence in the area is the Mall of America, one of the largest enclosed malls in the United States. According to their press site, "With 40 million annual visitors, MOA has more visitors than all other attractions in the state combined and nearly 10 times more visitors than Minnesota's second biggest attraction, Cabelas® in Owatonna." 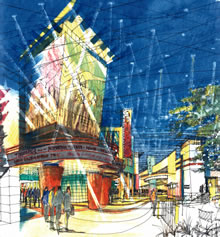 For years there has been talks about the proposed Mall of America Phase II. I recently found their new promotional website and it contains a lot of interesting information.

The expansion will be add 5.6 million square feet to the north end of the existing mall and will apparently be more open and let in more natural light than the original structure. The plan includes more parking structures and a skyway connection to the nearby IKEA. The expansion will integrate seamlessly with the current mall and connect to it on all four floors (including adding connections to the near-dead fourth floor).

A number of major structures are included in the mall plans. One of the main tenants is Bass Pro Shops, a major national outdoor sporting goods retailer. Major entertainment provider AEG will be building a 6,000-seat performing arts amphitheater. 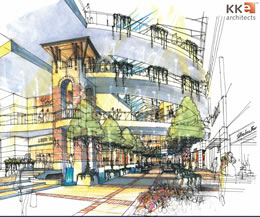 Some information says something about an NHL-size hockey rink, and I don't know where that's going to be located. The plans also leave room for an office tower and a couple hotels attached to the complex, including a family waterpark/hotel.

The new space seems to be designed to have different districts or areas of shopping, most of which look a bit more high-priced and trendy. The fourth floor seems to be devoted to entertainment attractions such as a movie theater, dinner theater, nightclubs, etc. According to the designs, there's also a "High Fashion District" and a "Home District". 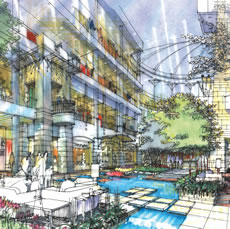 The main event looks to be a very open "Town Square" area, which looks like it may even mimic Times Square a bit. A central corridor of the new expansion is called "Canal Street" and is rumored to be a Venice-style center completed with gondola boats and everything. The plans also show an environmentally-friendly co-generation facility that will generate some heat and electricity for the building.

The annoying part is that there's no news as to when this will be implemented, although the mall's Wikipedia article says groundbreaking is supposed to happen in Spring 2007. The Wikipedia article also cites some concern from "outside forces" such as the city of Bloomington who are concerned about the ability for the $1.78 billion project to be completed. A state bill that aims to make the building construction tax-exempt seems to claim that construction will start in 2008 and finish up in 2011. 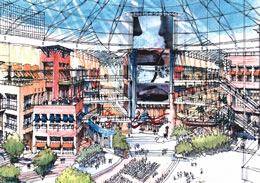 There are a number of improvements to the mall that seem to be a bit closer to reality and completed sooner. One is the reintroduction of a bar on the vacated fourth floor in the form of Cantina Corona, a Mexican bar/restaurant that is the first-ever place to bear the Corona brand. Also planned is the very high-end Klimpton Hotel near the south end of the mall. And finally, The Park at MOA will soon begin construction of a Gerstlauer Euro-Fighter type roller coaster, to be completed in 2008. These style of rides are some of the most cutting-edge and the mall says it will be the first upside down roller coaster at the Mall of America. Nice!

Model Views (from the City of Bloomington site): 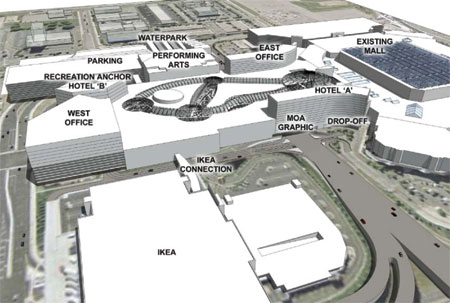 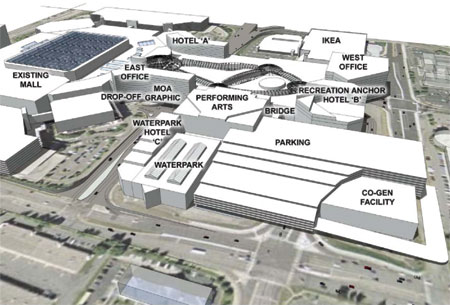 One of the major pet peeves of myself and many others who strive to use open-source software on a regular basis is the lack of documentation. Sure, installing it out of the box is well-documented, but modifying it besides downloading plug-ins/modules is rarely documented. Sometimes there's a nice API, but how does one get from not knowing anything about the system to just needing to know the exact syntax for a certain function? 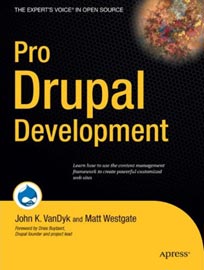 I don't have the time to do the full book review, but let me just say that the brand-new book Pro Drupal Development by John VanDyk and Matt Westgate is really an indispensable book. There really is no way, short of reading through Drupal's code and asking a core developer what this file does, to find out the things you will learn in this book.

The book, published by Apress, breaks down the major functionalities of Drupal in easy-to-swallow chapters. I'm just on Chapter 9, but already I've learned tons about how to theme Drupal, how to write my own modules, and much, much more. There are plenty of code examples throughout the book. The book reads well but also works as a good reference.

In short, if you want to start using Drupal as your content management system of choice and want to make the most of it, get this book. You won't regret it, and it's not too expensive either. Also, props to Apress for giving free copies to the Drupal Summer of Code participants!

After this read, I think I'll be ready to finally make that kick-butt music site that I've been hyping up for years. It's going to happen.