Last week we biked to Hidden Falls and on Tuesday I biked to and from work, but I needed to kick it up a notch this weekend because I didn't bike at all on Wednesday, Thursday, or Friday. So, I biked for 17 miles (and got a bit of walking in over by the lakes). Here's the map:

First, I biked along the Hiawatha Light Rail line for a bit until I got to the Lake Street Area. There I biked right onto the Midtown Greenway, which stretches all the way through South Minneapolis and a good way beyond. The Greenway is a great, long path that replaced an old railroad bed that stretched all the way through South Minneapolis and further west.

The western end of the Greenway opened in 2000 and is a nice, wide path in most places for biking and walking. Throughout all of Minneapolis, it is in a bit of a trench that goes underneath almost all the streets along 29th Street, but it is nice and green and has landscaping projects going along with it. It is connected to a further trail west, such that I biked past Highway 100 before turning back. 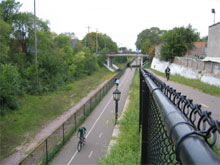 Plans are still in gear for the east end of the Greenway, although it is almost complete. The crown jewel of the Greenway seems to be a bridge they are currently constructing that goes across Hiawatha Avenue and the Light Rail line. (Temporarily the bikers and walkers just had to walk across the busy street at a light, but now you can't even do that with the bridge construction.) It looks like the designers were trying to rip off Norman Foster, but I just found out from this blog post that it is because of all the obstructions they had to get the bridge through on the East side where large power lines, another bike path, and light rail collide. It'll definitely be fun to ride across. 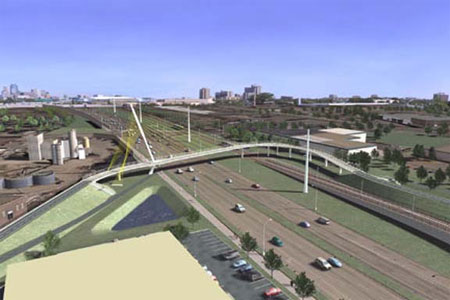 On the way back, I decided to take a more road-focused but direct way home. I rode up Hennepin Avenue until it became a bit of a freeway, at which time I found a cool bike/walk bridge and a path down to Loring Park. I just then biked through downtown on Nicollet Mall and then across the Hennepin bridge to University Ave. It was a great 17-mile trek, and I really enjoyed exploring Minneapolis by bike.

Keep it up. Maybe we go biking together someday.