Getting Around and Staying Fit with Nice Ride

Somewhat-reputable sources list the Minneapolis/St. Paul area as one of the "most liveable" cities in the country. I'm not sure if I believe that; I've seen many places that seem just as nice, although this is the only city I've lived in. Other places have listed the metro as a very "bike-able" area, and I'm starting to believe that. I know I've had some minor hostility from drivers on the road and some genuine hatred towards bikers from my friends who drive, so we probably still have a bit to go as well. However, a new development in the last year or two has shown that cycling is at least growing and somewhat popular and maybe even a sustainable business can be mad with it. This morning I got a chance to try Nice Ride for myself, and it seems like a valuable service to urban members of the Twin Cities. 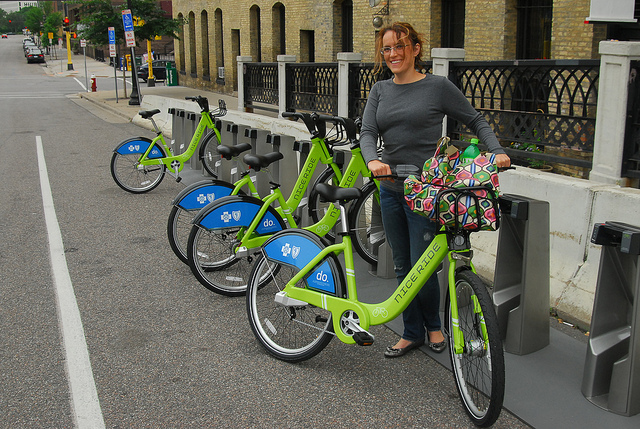 Nice Ride is an organization heavily funded by local companies, including flagship sponsor, Blue Cross Blue Shield of Minnesota, who spends a lot of money on marketing to encourage Minnesotans to stay active, and whose logo appears on each Nice Ride bike. Nice Ride currently operates 145 stations in and around both downtown Minneapolis and downtown St. Paul, including the six miles or so between downtowns. From any one of those stations, you can rent a bicycle and return it to that station or any other station when you are done.

For a one-time newcomer such as myself, a payment of $6 to my credit card will get me unlimited rides for the next 24 hours. Longer-term users of 30 days or the whole April-November bicycling season pay $30 or $65, respectively, which is much more reasonable. Additional trip fees are incurred if the bike is away from a station for more than 30 minutes, so the program is definitely geared towards folks who just need to take a short ride around town, not for long-term cyclers. Monthly or yearly subscribers also receive a small, plastic key with an RFID tag for their account which gives them immediate access to a bike from any station; less frequent users have to put a credit card into a card machine at one end of the station to gain access to a bike. Many other cities across the country and the world have similar programs, so you can get locations of stations and availability of bikes data from the SpotCycle app for your smartphone.

The bicycles themselves are simple but functional. The bike is rather heavy and well-built. It comes with only three gears, so don't expect going very fast. But you can get the bike going fast enough; there's just not that acceleration that you would get from a fancier bike. The bike does not have large treads on the wheels and is thus designed for the many trails of Minneapolis/St. Paul and the city streets. The bike does come with a rack on the handlebars with the potential to carry a bag, although it seems to me you would need to have a bit more tools with you to secure something on there. Overall, it's a functional bike, but nothing you'd want o own personally. After my ride, I did read on the Nice Ride FAQ page that I'm actually a bit over their maximum weight limit, but I'm not sure that this will stop me from using the service again.

This morning, I was able to take a city bus to a nearby Nice Ride station. From there, I biked 3-4 miles into downtown to run some errands. Since my bike is currently broken, it was nice to be able to just pick up a bike, go on a ride, and then just leave it at my destination and take the bus home. There are stations nearby many bus and train stops, and especially for downtown, there is a Nice Ride station within a block or two of any location. Since I am personally uncomfortable biking after dark due to my poor eyesight, I can see myself biking to a concert or other evening event and then being able to take the bus or light rail home that night. You don't have to worry about locking up a bicycle and it getting stolen, you just deposit the bike at a nearby station.

Yes, it's a helpful service, but will I be getting a yearly subscription? Not right now. I currently live in the Highland area, a couple miles from the nearest station. If there was a station only a short walk from my apartment, I would be very likely to purchase a subscription and use it for a bit of fresh air while heading around town. It definitely makes sense to start up a service like this in the downtowns and more populated neighboring areas, but I hope it continues to expand throughout the cities of Minneapolis and St. Paul.

Another question about this service is: Can it be profitable? Yes, it is organized as a non-profit right now and is heavily supported by local corporations, but is it profitable? Could it be profitable? A non-profit can be one way to kickstart a business, but but is this always something that will be around as usage grows and the donors dwindle? It seems that most other U.S. metros that have similar programs have them set up in a similar way, so only time may tell, I suppose.