OK, so it seems that this blog is all about Apple these days.  Hopefully one of these days I'll get some other subjects.  But hey, I know some of you like to hear my thoughts. 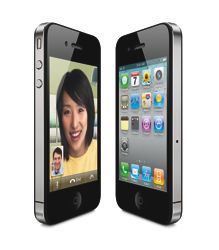 First, here's the details.  It's called the iPhone 4.  It's not the iPhone 4G because it doesn't have 4th generation data network services.  It's got a new look, with glass covering both the front and the back.  There's a steel band around the sides, which makes up antennae for WiFi and cellular networks, which will hopefully increase the reception of signals on the phone.  There's a second microphone on the top of the phone which will help for the audio of the phone by canceling out background noise.  Also, the phone has a gyroscope in the phone in addition to the accelerometer and compass for superior six-axis movement.  This could supply more responsiveness in games and the so-called "augmented reality" apps.

The iPhone 4 features the same A4 processor as the iPad, which means it will be nice and snappy.  Also, the display is still the same size but features 4x the pixels of the old 3GS.  Apple has called this Retina Display because at a normal viewing distance the human eye cannot detect the pixels on the screen.  This definitely is a new and interesting move for Apple; no consumer electronics device has ever boasted a screen this detailed.  The word from the journalists who have seen this is that you have to see the display to believe the detail.

Last year the iPhone 3GS debuted with a decent camera.  The iPhone 4 sports a 5-megapixel camera with a small LED next to it to use as a flash or even continuous lighting on video recordings.  The camera can record 720p 30fps video.  They even announced a $4.99 iMovie app that allows you to easily edit clips together, overlay music and titles, and a bunch more.  I doubt I'd ever use that, but it's pretty cool.

A low-resolution camera is also included on the front above the display.  It seems that you can take photos and even video with that camera as well.  But Apple also introduced a new featured called FaceTime, which allows you to call up an iPhone 4 user and move the call to a Wi-Fi video call.  It's that thing that futurists and sci-fi writers have been saying for decades--people holding up their phone and talking with another person while staring at them.  Apple was pushing this for most of the last decade with iChat on their Macs, and now it's on the phone.  However, right now it will be on iPhone 4 devices.  Apple said they are making it an "open standard", but it's very unclear what that means at this point.  For example, Skype wanted to say they'd work with the FaceTime protocol but then they backed off on that statement.  Apple made some emotional pleas for the usage of FaceTime with a husband watching his baby's first steps over the phone and some deaf persons communicating via sign language.  Unfortunately, FaceTime does not work over the 3G network, only wireless networking at this point.  It may be a cool, new, exciting thing that everyone will be using someday, but I think it's got a long way to go before that.

Of course, the new iPhone 4 includes all the features of the iPhone OS 4 that they previewed a couple months ago. Oh yeah, and it's no longer called "iPhone OS", it's now "iOS" because it's not just iPhones and iPod Touches anymore.  One new addition to iOS 4 that I like is multitasking also includes shortcuts to the music player control for the program that is currently playing music.  Also, this music control screen includes a button to lock the orientation, which is great for when you're trying to read your phone while laying down and making sure the iPhone doesn't try to switch layouts.

So what's the cost?  The iPhone 4 starts at $199 for a 16GB model and goes up to $299 for 32GB.  The old iPhone 3GS at 8GB is now available for $99.  Anyone whose 2-year AT&T contract expires before the end of the year is eligible for an iPhone upgrade with an $18 upgrade fee.  Otherwise, if you want to start a new contract or not have a contract, you will have to pay hundreds of dollars more.  Apple's iPhone 4 will be available in stores and shipped to your door on June 24th with pre-orders starting this Tuesday, June 15th.  Apple iOS 4 will be available for download for iPhone 3G, iPhone 3GS and iPod touches on June 21st as well.  Of course, the iPhone 4 will be available almost everywhere around the world by the end of the year at various prices and plans.

So what do I think?  I'm probably going to be getting one within the next month.  I do want to see how the iOS 4 performs on my iPhone 3G on June 21st.  However, the 3G has a much slower processor and will not be able to do the multi-tasking features that newer phones will be able to use.  When I got the phone almost two years ago (and even last year), I didn't really care about the camera.  But after a couple years of use, there's enough times I want to casually take a photo or two and the 1-megapixel camera on my 3G doesn't really count.  This 5-megapixel camera will be nice for off-the-cuff concert photos and reviews of locations via Twitter and may be actually enough to use in family photo collections and such, so that will be a bonus as well.  In short, the iPhone 3GS these days is a bit slow and I wouldn't mind getting a new one, and since it seems I can do so for a fairly small price (and a new two-year contract), I'll probably make it happen.