First, let me preface this post with some information about my television watching habits. I've never owned a TV in the almost 9 years since I moved out of my parent's house. Most of that time, there hasn't even been a TV set in the house, although for a year or two a roommate had a TV tuner card for his PC. For a couple months I had cable with all the trimming, and all I really watched was reruns of Seinfeld, The Simpsons, and Cosby while making lunch or dinner. Oh yeah, and during that short period I watched lots of TechTV and Star Trek: The Next Generation. That was seven years ago. The only TV shows I've watched since then, besides the occasional episode of Charlie Rose or late-night talk shows, is Band of Brothers, Firefly, and Monthy Python's Flying Circus. Oh, and The Colbert Report makes an appearance once in a while, although a lot more this fall before elections. Yes, that's hardly a typical TV watcher, I know.

I like all these shows to an extent, but the only ones I took the time to get fully involved in was Band of Brothers and Firefly. I've watched all of their episodes, but then again, each one only has 10-20 episodes ever. Part of the reason I liked these was that I don't like to commit to TV. The longer the show goes, the less point it ever gets to, from what I hear, and it quickly seems like a waste of your life. (Although, comedy shows are completely different because there's little story arc, but they make us laugh.)

When I was told that Joss Wedon, maker of some of TV's shows with the most cult following and creator of the great sci-fi series Firefly was coming out with a new show, I decided to check it out. After watching the first two episodes, I'm still not sure what to make of it, but it's definitely interesting. It's definitely a science fiction show injected with almost everything I hate about today's world of TV. 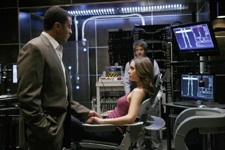 The premise of Dollhouse is that this company has created a method of turning people into a pretty simple, rather blank personality without a care in the world. They live in this utopian place where they have no worries and are waited on by helpful staff to make sure they're in the best condition possible. But from time to time these "blank slates" are programmed with other personalities in order to perform a predetermined job. After the job is performed, the "active", as their creators are call them, has their memory wiped and they think they fell asleep and they go back to their carefree, utopian existence.

This sounds great. It's a great sci-fi premise. It's just a bit past what can probably be done with today's science, but not out of the realm of possibility of the near future, for sure. And, like every sci-fi show, it's exciting to explore the moral and ethical ramifications of humans having the ability to perform these actions. Within the first two episodes, many things are explored and hints at many other things are forthcoming. Joss Whedon is definitely still on his A-game as far as the writing goes.

The characters and cast are definitely set up well. Olivia Williams (Rushmore, The Sixth Sense) plays the head honcho of this Dollhouse operation, calling the shots of which missions should be run, although it's unclear how she gained this post. Harry Lennix (The Matrix Trilogy's Commander Lock) plays Echo's "handler", a highly trained ex-law enforcement man who accompanies the lead "active" on missions and is tasked with making sure the "active" is not hurt or damaged, and he seems a bit unsure of how well this technology all works, I think. There's also a preppy, geeky 20-something programmer that seems to have come up with this technology and is pretty confident in his work. Also, there's an FBI agent who's trying to track down this elusive Dollhouse organization and seems to stay a step or two behind them while the rest of his colleagues is sure he's chasing absolutely nothing.

The problems I have with the show are first, the ethics of he show, if it has any. First, these "actives" live in a commune where they all shower and live together, not sleeping in the same beds, but using the same communal showers. While sleeping, these "actives" are basically locked up in beds recessed below the floor with semi-translucent windows that cover them. None of these beings seem to find this confusing or disturbing but just walk around in a somewhat blank daze. I think this can be overcome, though, because the show is really only exploring this idea, not condoning it. Still, at this point it's very unclear what the show is trying to say about this idea and it may go in the wrong direction. And, lastly, it seems that an "active" can be bought for any reason, and the first and second episode both include parts where the main character is sent on a mission where it only seems that she is hired to be a charming girlfriend, both on the streets and in bed. 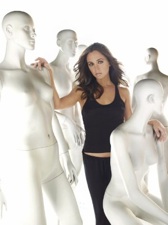 And this brings me to my other beef, which is the way that this show panders to the mainstream TV crowd. First, the main character has to be a knockout babe who kicks butt at some point in every show. I'm not saying that it can't be a good-looking woman as the main character, but TV shows these days have to always be filled with main characters in which the main character has her shirt off or is wearing almost no clothes at some point, and that should not be the point of a good show. Second, both episodes have shown the main character romantically involved and in bed with another character, which seems to even more emphasize my last point but to an even more disturbing level. Third, every episode seems to be super-intense, such that both 47-minute episodes I watched were more intense than any movie I've seen in the last year. The bad guys in the first episode are a couple kidnappers who are working for a serial child molester. The second episode pits our heroes against a psychopathic outdoorsman who seems to befriend people only to suddenly turn his back and try to murder them as a fun "game". I'll admit, these are some mean bad guys, but why do TV shows have to be so intense? And why are all the bad guys mentally deranged in some way on all the TV shows, when in the movies they seem to be of a higher life form?

All these shortcomings make me long for more Firefly, where Whedon came up with good characters that didn't sell themselves on 30-second commercials for the show but actually had a role to fill and something interesting to talk about. Dollhouse may get to that point someday, but I'm not sure if I'm going to stick around to find out if it will. Still, the show leaves us hanging, as the creators and curators of this Dollhouse seem to be a bit careless and it's obvious that their technology is not yet flawless.