To be honest, most times, I hate the "teaser trailers" that show nothing more than a new logo. But hey, this one shows the Enterprise under construction, so it almost doesn't count as a teaser. Yes, this is the only big movie that I know about for this Christmas: a Star Trek movie that predates the original series and contains a cast never before seen on TV or film. Plus, it's written and produced by the guys behind MI:III and Lost. It might be pretty exciting, but we'll only know in 11 months.

Watch the Star Trek teaser trailer at the official site.

Yesterday, Apple made some big announcements, as usual, to kick off the MacWorld Expo, the largest convention and trade show of all things Mac, iPod, and Apple. There weren't any really big suprises, but Apple definitely delivered some really interesting products.

First up was talk about some updated products. Steve Jobs demoed free updates to the iPhone and Apple TV. The iPhone (and iPod Touch) got some nice new features, such as being able too put a bookmarked webpage (and probably other third-party apps, which are coming next month) on the home screen as an icon. Also, the icons can be easily moved around and multiple home pages can be created. Even the icons on the bottom of every screen can be changed so your favorite apps have easy access. 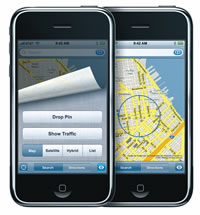 The Google Maps app has been cleaned up and you can now get your approximate location from the cell towers and a database of geolocated wi-fi access points. The iPod Touch until now shipped without applications like e-mail, but now they're available to all Touch owners for $20 and free with the phone. And, finally, Apple TV has a brand-new interface that packs more functionality in each screen as well as makes it so you can purchase movies and music, and thus you don't need a computer to use an Apple TV (although it does sync with iTunes if you have it). This is interesting because people who don't really care about computers and iPods could even purchase music and movies directly from the Apple TV.

The first major announcement is that Apple is now allowing users to rent movies from the iTunes Store. Apple has signed all major and some minor studios to their rental agreements, and have set pricing for movies at $2.99 and $3.99 for new releases. Users can also download HD (720p) movies for a dollar extra, and it seems that purchasing movies directly to your iPhone or iPod Touch is currently not available, although I think it would be a cool feature if they had that someday so you could rent some movies at the airport before you get on a flight. The standard DVD-quality videos are only about 1GB and download pretty quickly over a standard broadband connection. 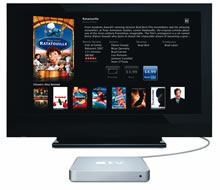 Apple claims that most broadband users will have enough of the movie downloaded in under 30 seconds that the movie can be started. If this is the case and it looks as good as DVD, I may start considering it as my preferred method of rental, because it's cheaper than going down the street and getting a scratched-up disc from Hollywood Video and even more instantaneous.

The biggest part of the announcement was the MacBook Air, the thinnest and lightest laptop computer ever. The aluminum case holds a 5-hour battery and an 80 GB hard drive, which is powered by a 1.6 GHz Intel Core 2 Duo processor and 2 GB of RAM. At its thickest area, it's only 0.76 inches thick, and on the edges it measures only 0.16 inches thin! Steve Jobs brought it out in the standard inter-office envelope to an amazed audience. They claim it's the thinnest laptop computer ever, and at that size, I'm pretty sure no one can dispute that. 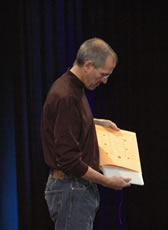 Although the size is small, Apple really doesn't skimp on features. This ultra-portable has a 13.3 inch screen and a built-in iSight camera. The keyboard is full-size and has the ultra-hip LED backlight. The touch pad looks even bigger than my MacBook Pro touch pad, plus it can do new gestures such as pinching and rotating in various programs. It includes Bluetooth and 802.11n Wi-Fi, the fastest wireless internet available. Also, for the person who wants the latest and fastest, the hard drive can be replaced with a 64 GB flash memory hard drive, although it remains seen as to how well these function in the long term. These are $1,000, but apparently they are faster than hard drives and use less battery power. 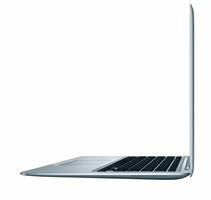 So what does it lose? Well, if you want to use tons of accessories, you'll need a USB hub and lots of dongles. For $99, Apple sells a companion DVD-burner drive that plugs in via USB because there is no internal CD or DVD drive. It comes with dongles to connect their Micro-DVI to VGA or DVI to use an external monitor. Also, USB dongles are available to connect to Ethernet or a phone line. I guess the mobile office would require a nice USB hub to connect more than one of these at a time.

Why is it called the MacBook Air? Well, I guess because the computer is all about a wireless experience. If you think about it, most everything is done wirelessly these days. Most people use the Internet and e-mail almost exclusively (and some Twitter and Facebook exclusively), plus, if you have your music and movies in the way iTunes likes them, you have them either on your laptop or an other connected Mac.

The only major issue is the occasional install of software or burning of CD, and Apple has come up with a solution for that too. Included with the MacBook Air is Remote Disc software, which allows you to wirelessly use a CD or DVD drive from any computer on the local wireless network once you install it on that Mac or PC. It certainly solves that problem as long as you have access to another computer, which almost every user of this computer will undoubtedly have. Still, the "MacBook Air" is a bit of a hokey name, much like the "iPod inviso" because it isn't aerodynamic enough to fly or anything. It's just really small, not made of air, right?

The MacBook Air serves a fairly small market of people who want to take their computer everywhere and not lug around a large backpack. This "ultra-portable" market is commonly a computer under 3 lbs. that has all the basic features of a laptop in a compact package. Most of these have a 11 or 12 inch screen and a smaller keyboard, while the MacBook Air has a 13.3 inch screen and full-size backlit keyboard. The MacBook Air is also thinner than all the currently available competition from the likes of Sony, Dell and Gateway. At $1799, it may seem a bit pricey, but it is only marginally more expensive than similarly-styled laptops, if it is at all.

Some of us were hoping for more from MacWorld, but it did not happen. Still, you can expect a bigger-capacity iPhone and an iPhone with 3G functionality along with some nice software updates across the line throughout 2008 if predictions prove correct.