I've posted about the Apple iPhone before, and most of you probably knew it was only a matter of time. About 14 months ago I decided that the iPhone wasn't good enough yet and so I purchased a Palm Treo. Well, I guess that was not the best idea, because the phone started giving me problems just after the year warranty. A number of the many buttons on the Treo, including letters such as "N", "R" and "U" were not working well, such that I had to press them a couple times to even a dozen times to get them to register. Towards the end of my use of it, even the power on and off button was wearing out and I couldn't turn on my phone for a minute or two the week before. While talking to Sprint representatives seeing what they could do to get the phone fixed, I found that it would be about $200 to get it fixed (because the 1-year warranty had expired) or $200 to leave my Sprint contract. 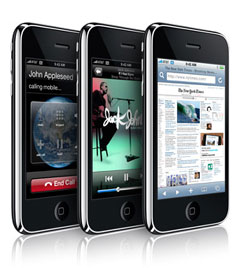 To be honest, I was kinda glad this happened. A number of my coworkers had purchased iPhones in the last couple months since the iPhone 3G was released, and I was envious of the abilities of their phone. Primarily, my phone really had only close to text-only web browsing, and the ability to view things in full layouts and full graphics was something I really wanted. Plus, the Palm OS is nice, had many applications written for it, and is pretty stable, but the applications being written for the iPhone are so much cooler and are written for today's computing world, not the world of yesteryear. Let's just say I was ready to upgrade, and this non-working phone was my push to get it.

So, last Friday, I walked into the Mall of America Apple Store and picked up an iPhone. And, well, I definitely like it. It's going to be great to only have one electronic device in my pocket - no PDA phone and iPod as well. Plus, on the way home from work today, I watched a number of video podcasts on it's beautiful 3.5-inch screen. It was totally fun. Here's a couple things I've enjoyed since I got ot:

I will keep playing with it and I'm sure that more blog posts about functionality and cool apps that I find will be forthcoming. If you see me in the next couple weeks, feel free to ask me and I'll give you a demo.