Yesterday, Apple announced some updated music-related items. They announced updated versions of all the iPods, plus some purported improvements to their iTunes software. But, even after hearing about all the announcement from all the news sources, I'm still not sure it's at all exciting. Here's the rundown:

First, there's the iPod nano. The nano is apparently thinner and more colorful than ever. The two-inch widescreen display is better than ever for viewing your music and video. The iPod nano also includes a sensor that tells if you're holding it up straight or on its side and will react to that with its updated software. Plus, with nine different, bright color options, I think these may be a hit this fall. 8GB comes at $149 and 16GB at $199. The iPod shuffle was also updated to include half of the vibrant colors introduced on the nano as well.

The iPod classic was updated to a 120GB model for $249 and the 80GB and 160GB versions are discontinued. Unfortunately for those like me that like a lot of storage space for their library, this further signals that Apple may be considering the iPod classic to be even closer to dead. I still like to carry around all my music and the iPod classic is the only one I can do that on, so I hope they don't discontinue it too soon. It's also a bit odd, in my opinion, that they did not bring the features of the iPod nano software to the iPod classic, though. 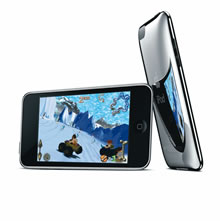 The biggest deal they wanted to make, though, was the iPod touch. The touch is slightly thinner and a curved back like the iPhone 3G, plus it has a couple minor new features. There's a speaker included inside the iPod touch's innards, although early reports say it is not as good as the iPhone speaker. Still, it's nice to have a speaker for casual gaming or sampling songs for your friends, although dedicated speakers would be much prefered for serious listening. Also, the Nike+iPod system, which allows you to track your workouts if you buy a sensor to put in your shoe, is included. Some persons have already taken the iPod touch apart and found what looks to be a Bluetooth chip in there, so besides a working Nike+iPod it's possible that Apple will open usage of Bluetooth for more on this later.

The prices and storage capacities of the iPod touch have been updated, of course. There is an 8GB model for $229, a 16GB for $299 and a 32GB for $399. Apple, more than ever, touted the App Store with its hundreds and hundreds of applications for the iPod touch, and especially showed it off as a gaming device, which is a rather uncharacteristic move for Apple. It's well-known that Steve Jobs does not play games, really, and in the past Apple has been very lackluster in promoting their products as a gaming platform, but this presentation showed a possible new effort to push the iPod touch and iPhone as a gaming platform. Only time will tell.

The only major software feature seems cool, but in my opinion it's just snake oil. Apple's new "Genius" feature is displayed with a little atom icon just like their in-store Genius Bars and offers recommendations of related songs. First, iTunes anonymously uploads your library's data, and then you start getting Genius features. The Genius sidebar in the right side gives you songs, artists, or albums based on the songs or artists you currently have selected, and since it knows your library information, it does not list items already in your library. Also, select a song and press the Genius button on the bottom right of the screen and you get a playlist of songs from your library that are supposedly "similar" to that song. In my opinion, the Genius system doesn't really seem to be that smart, but it may get smarter. This seems to be just the same as the iTunes Store's "People who bought this also bought" database, which isn't really anything groundbreaking, but I guess it's cool to have that extended directly into your iTunes library. If you sync an iPod or iPhone with a library that has Genius enabled, the iPod or iPhone can also create Genius playlists on the fly as well.

These announcements were mostly what expected, and after finding out all there was to hear, I was a bit disappointed. The iPod nanos do look amazing mostly because of their bright colors. Nothing else was very exciting, and it makes me wonder why Apple was touting this as such a big thing. To be fair, Apple's financial people were trying to tell investors that it was nothing to get excited about, but on the other hand, Apple's PR team was saying it was going to be amazing. (I guess the investors are more the realists.)

After all these announcements, Mr. Slow and Boring himself, Jack Johnson, took the stage to lull us to sleep. After Steve Jobs woke us from our slumber to say, "Thanks for coming," we all thought this was the coolest and most amazing new products ever. Yeah, right.