I just noticed that, a week or two ago, MetroTransit announced that route and trip information for their buses and trains throughout the Minneapolis/St. Paul area is now available via Google Maps.  The program, dubbed Google Transit, has been active for a year or two in such major markets as Portland and Chicago, among many others.  Here's a trip I just queued up: 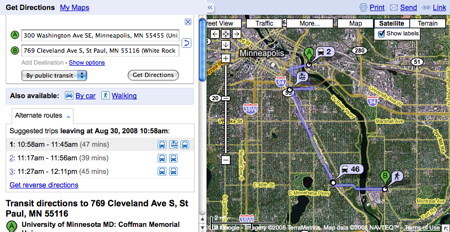 On the right side of your trip, you have a map that shows the transfer points and the routes taken, as well as any parts that need to include walking.  On the left side, there are three options of similar trips leaving at the time, but notice that only the first one (which is selected) uses the light rail - the others route you down University Ave. and down Snelling Ave.  Below the trip you've selected it gives you details of each leg of the trip as well and most locations even include a Street View of the corner.

Why use Google Transit? First of all, with MetroTransit's website, you had to look up the address and then route it.  Google Maps is smart enough to figure out the address for you so that saves a step.  The map details are much better and gives you a road view as well as a sattelite view, which gives you much more data about where you are going.  And many say that MetroTransit's website is terrible, but after visiting some other sites for other services, I've found it to be fairly competent.  Still, though, the Google Maps interface for the exact same data gives you all of the route information that you can get at MetroTransit and a bit more in an easier-to-use package.