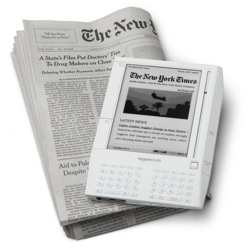 Last week, Amazon.com announced its newest big venture, the Amazon Kindle. It seems to be the second major entry into the world of eBooks that are functional and will help develop this potential new market.

First of all, these eBook Readers use a technology called e-Paper, which seems to be something like a computerized Etch-A-Sketch. The machine has black and white pixels, and the reader only uses power to change whether the pixels are on or off. Thus, while reading a page, it takes no battery power; the Reader only needs power to change the content of a page. The only major side-effect seems to be that some readers get annoyed by the process of redrawing (or "turning") the page. 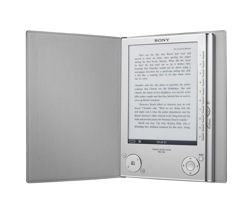 Sony recently launched their second version of the Reader platform, which I had the chance to play with at the local Target store a couple days ago. The product is very small and silver. You add books to the Reader via synchronizing with your computer. The best formatted books are all purchased through the Sony Connect store, but you can upload any PDF and it will work fairly well. Navigation seems to be simple and sleek, with less than a dozen buttons on the device. Priced at $250, it's definitely still for early adopters and bookish peoples, but not a ridiculous amount.

In comparison, the Amazon Kindle has many interesting new features, mostly relating to getting items on your Kindle. The Kindle includes a wireless EVDO modem, which gives you access through an unnamed cell phone provider (for free). This allows Amazon to market to those who don't use the internet much or at all, because they don't need a computer to use the Kindle at all. Plus, with the wireless distribution, the Kindle has a number of other features, such as newspaper and magazine subscriptions to be delivered automatically to your Kindle. (Also, for those snooty bloggers who want people to pay for their content, you can subscribe to enhanced RSS feeds of Slashdot and people like Robert Scoble.) 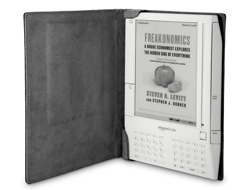 With these enhancements come some downsides, I think. First, for user-interface reasons, because you do not have a computer to sync with, the Kindle needs to have a keyboard. And much of the front real estate is taken up with a small keyboard for hunting and pecking. Second, the rechargeable battery get quickly eaten up with features such as the Wireless and mp3 playing functionalities, although both can, of course, be turned off. The user interface seems like it may be a bit clunkier than the Sony Reader, mostly because the selection buttons have been replaced with a small scroller wheel or something.

Most importantly, the Amazon Kindle is selling for a whopping $400. This isn't an Apple product, and with the beige-white look to it and the many, small buttons, it's not winning any great design awards either. I don't expect the Kindle to catch on unless they drop the price in half to increase the adoption of this new device. Still, for people who love to read and want to cut down on paper and bulk in their backpack, this may be the perfect solution.

Right now, Facebook is probably the most successful and biggest hyped thing on the Internet. Most of it is for good reason, because many people, especially college students, have almost exclusively adopted it as their replacement to e-mail and Instant Messenger. With the release of powerful APIs to hook deeply into Facebook's site, some powerful applications (but mostly really annoying ones) have been created that leverage the social network of Facebook and integrate so well you don't even realize it's a program built on top of Facebook. It's amazing how successful this has been with consumers. But, of course, now that Facebook has aligned with Microsoft, it's time for Google to take a swing.

Google does not want all the social networking to go to Facebook (and therefore the ad dollars to Microsoft), so they released an API package they call OpenSocial. It basically seems that you'll now be able to create Google Widgets that interact with data from social networks. Signed on are currently MySpace, Friendster, Six Apart, and Salesforce.com, among many others. The openness of the system sounds intriguing, but we have yet to see how the API matures and what aspiring developers can do.

I think that, of course, it's great to have an open platform. Plus, as TWiT said on this week's podcast, these social application developers don't have to be locked into Facebook's system exclusively or be worried about Facebook taking away their business with a new feature. Plus, Facebook is a very closed system, and the ability to put some of this content on your blog as well as behind the curtain of the Facebook login will be a boon for plugin developers. In the end, a viable competitor in any market is good, and I'm glad that Facebook may finally be getting a handful of viable competitors all supported by Google.

UPDATE: In other Google news, this morning they announced the Open Handset Alliance which is developing a free, Open Source phone operating system. Between Google and Apple, I'm actually getting excited about owning a cell phone, especially a Google OS based on Linux.

After talking to a couple friends, I found that I was assuming my readership knew a bit about Macs and how they work. Some readers thought when I posted .mac: What Is It Good For? that I was saying that I didn't like my new computer. That's certainly far from the truth.

.mac (pronounced "dot mac") is an online service that Apple tries to sell you for $99 per year. They give you a mac.com e-mail address, 10GB of storage, and the ability to synchronize settings across your Mac user accounts. What I was saying was that it seems like it'd be worth it if you have a couple Mac machines, but with only one Mac, it's hardly worth it. Plus, I have my own server on which to store data and run my e-mail.

Sorry if I confused you, but I'm glad I was able to clear that up. Hopefully, sometime soon, I'll give a rundown about what I like about the Mac.