I don't know how you got here, but I've had a bit of a problem with my domain name. Right now "da-man.com" is not owned by me somehow through some slightly underhanded dealings from an old hosting company. I am working to get it back, but until then we'll just have to hang out here.

Thanks for your patience and prayers that I will get back up on my feet again. ;-) 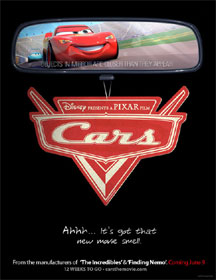 That's how Pixar rolls it.

This weekend found the release of Pixar's latest film, Cars. Just as Pixar creative head John Lasseter loves toys and made great movies with toy characters, it's very apparent after watching this movie that he's a huge fans of automobiles and the culture that surrounds them. After the movie I was thinking, "What kind of car would I be if I were in Cars?"

First off, every single movie preview before the movie itself was for some crappy, 3-D animated movie from another studio. None of them looked any good. The execption, of course, was next year's Pixar film directed by The Incredibles' Brad Bird - check the preview of Ratatouille to see fun and original upcoming movie about a rat.

Of course, the short film before the show was fun. The short, entitled One-Man Band, involved two one-man bands dueling for the single coin of a tiny peasant girl. It was very funny and enjoyable musically, as usual.

As with every Pixar release, the animation in Cars is amazing. Although I wouldn't say any certain aspect of the rendering was amazing, everything looked almost perfect. It wasn't photo-real; it was still a bit more clean than that, but, of course, they are talking cars, so ultra-real would be a bit scary. It was amazing to see a NASCAR-style stadium full of 10,000 watching cars, the cheering trailers in the middle of the track, and equally the amazing western desert scenery of Route 66.

So what about the story? As a local review said, "There are no human characters in Cars, but few movies this year will have more humanity." The story finds star racecar Lightning McQeen getting stuck in Radiator Springs, a happening place in the '50s that got passed up by the freeway. Through it, the hot-shot realizes that there's more to life than just him, his fame, and fortune. Plus, there is more beauty and friendship off the beaten path than on the race track. Plus, if you like classic cars and the '50s neon light decor that brought those little towns to life, you can't miss it. It's priceless.

Pixar movies as well as other Pixar references. See if you can spot a blimp that looks like Buzz Lightyear as well as the cast of the For The Birds short. Sports fans will find car-styled versions of favorite sports announcers and a clip of "Jay Limo" cracking a couple jokes on late-night. It's a blast.

Just for your information: if you get me a copy of the cool poster with every character on it, I'll be your friend forever. It's just so cool, I need to have it!

Did You Ever See Invasion of the Body Snatchers?

Two years ago, I was visiting the new Infuze Magazine and checking out their new features. One of the features was Prodigy, a serialized novel by Robin Parrish. I loved it, mostly because Robin watches many of the same movies as I do and has much of the same tastes. The book played like a mystery, had elements of The Matrix and other futuristic sci-fi movies in it, and was action-packed at every turn. Every two weeks the website would have another chapter, and I'd spend the next couple days after reading it asking, "What's going to happen to Grant?", "Who is that barefoot girl anyways?", and "What the heck is going on?" 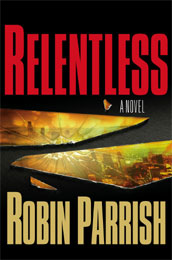 Although the online version had some answers, it was enough to keep me clamoring for more. Apparently I'm not the only one, because Bethany House Publishers decided that the budding novelist was worth investing in. Robin will have his first novel, Relentless, available in stores within the next couple weeks. I haven't read it yet, but apparently it's much like the online serial but better. You can read the first chapter on Robin's official website, so if it sounds like your type of book, give it a read.

Sometimes I buy stuff like these on Amazon.com, but because I'm really looking forward to this one and I get everything else online, I'm going to do my offline buying game. Basically, it goes like this: If Barnes & Noble or Borders has the book in the store and I can find it (I don't like talking to Customer Service people), then we win. I win because I get to purchase and start reading the book, and the store wins because they made a sale. Losing in this game is me breaking down and buying it on the internet.

I play this game somewhat often with music releases, and, sad to say, most of the time the mainstream music stores lose. So don't tell me I don't try to support the best artists in the industry and promote them in the mainstream.

To Be A Revolution, Yeah

The past couple weeks I've been reading an interesting book called The Cluetrain Manifesto. I just finished it, so I figure I'd offer my thoughts. I picked it up because I was researching a lot of SEO/SEM stuff, and one of the biggest names in the industry said it was required reading in an interview.

So how was it? Well, first of all, it's an old book. The copy I have was published in 1999, I think. But for being so long ago (and before the dot-com bust), it certainly has a lot of good stuff to say.

For the most part, it explains why traditional business is dead. With the rise of the Internet, there's no way to keep your company's critics quiet. The Internet is not about you marketing your company, it's about people having an open conversation about your company. Apple sure doesn't get it, because they keep their process up as tight as possible (and sue anyone who uses the Internet like one would expect).

Some of it sounded like a couple people who were just fed up with "business as usual" and just wanted to rip on their bosses. But most of it made sense. It made me think that we should be working harder to provide that interactivity and openess on our sites and not make it such of a one-sided conversation. Sure, nobody sends us e-mail unless they need to complain, but we should make it easier for them to comment on it.

The revolution is happening on the Internet right now and it is not being televised. Are you and your company involved in the open and free exchange of ideas, or are you shut up in your own little world, ready to be trampled upon by the competition?

I don't know what to decide out of this book, but it was good reading. Next I'm reading about how to use blogging to promote your company, so that should be a bit more practical application of the Cluetrain ideas.

If you want to read the book, I just found out the entire book is readable online. So, if you're interested, check it out.